Living around the Loch

Ever since the first settlers moved north, following the retreating ice, small groups of people, often only two or three families, lived on the small pockets of cultivable land along the shores of Loch Morar and Loch Nevis.

Before the Romans came to Britain and for several centuries after, they were members of Pictish tribes about whom we know very little. During the 9th and 10th centuries newcomers arrived from both south and north, bringing with them the Norse and Gaelic languages from which most of the placenames in the area are derived. 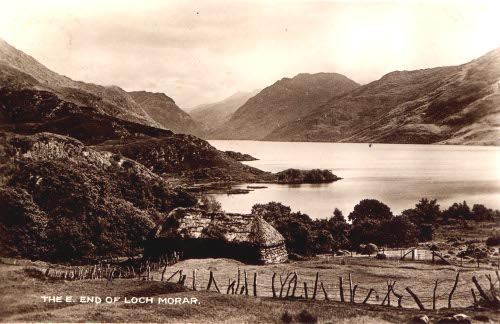 Swordland.
The name comes from the Norse svard land

Small deltas of fertile land around the estuaries of streams flowing down from the surrounding hills provided ground where oats and hay could be grown, while the hills provided pasture for small flocks of sheep and the black cattle which formed the backbone of the Highland economy up until the 18th century.

The sea was close by: for people living in the communities around Loch Morar the narrow neck of land at Tarbert provided access to the "herring lochs" of Loch Nevis and Loch Hourn. When times were bad, mussels and winkles harvested from the seashore could stave off starvation.

By the second half of the 18th century, however, changes were underway which would undermine the way of life of the people living around the lochs and lead to the abandonment of most of their homes.

The final attempt by the Stuart Pretender, Bonnie Prince Charlie, to reclaim the British crown for the Stuart dynasty ended in disaster and defeat at the Battle of Culloden in April 1746. In the months following the battle Government troops scoured the West Highlands, searching for the fugitive Prince and burning the homes of anyone who was considered to have participated in the rebellion. A force of militia was stationed at Earnsaig on Loch Nevis and patrolled the area between there and the River Morar.

In spite of their presence, Prince Charlie did spend three days sleeping in the open air north of Mallaig at the beginning of July 1746, before crossing the River Morar and making his way via Borrodale to Meoble. Two months later, after wandering as far north as Glenshiel and east as far as Glenmoriston, the Prince made his way back to Borrodale and escaped aboard a French ship that was waiting there.

Others were not so fortunate. In June the Jacobite Lord Lovat had taken refuge on the island of Eilean Ban in Loch Morar, where Bishop Hugh MacDonald had a house. The Government forces learned of this from captured Jacobites, sailed into the River Morar and carried the ships' boats overland to a point where they could launch them onto Loch Morar. Lovat's companions had taken all the boats on the loch with them to the island, believing that this would make them safe from attack. Seeing what the soldiers were doing the men on the island took to the boats and escaped eastward along the loch. All escaped, except for the Bishop's brother, Dr. MacDonald, and Lord Lovat, who was in his 70s and too lame to escape overland with the others so had been left hidden not far from where the fugitives had landed on the shore of the loch. Lord Lovat was rowed back down the loch then carried aboard the naval vessel Furnace. He was tried for treason and executed in London on 9 April 1747, entering the history books as the last man to be publicly beheaded in Britain.

Angus and Donald MacLennan of Buorblach were among the many ordinary clansmen from the Jacobite army who were sentenced to be transported to the American colonies. No doubt there were others from the district who suffered the same fate or worse.

The following century was to be more peaceful in the Highlands but the old way of life was already changing rapidly and would never be the same again. Ever since the Union of the Crowns in 1606 the relationship between clan chiefs and their people had been changing. As the role of the chiefs moved gradually from being tribal chieftains to landowners, that of the clanspeople moved from being a source of military power to being paying tenants. Clan chiefs began a continual search to find ways of making money from their lands. Many borrowed money, using their land as security. Land began to change hands, as the need for money became more pressing. In 1768 North Morar became the first of the Glengarry lands to go, sold to General Simon Fraser, son of the executed Jacobite chief.

At the same time, pressure on the land was growing. In spite of a steady flow of people emigrating from the Highlands, the population was increasing dramatically. In the west and north of the Highlands it increased by 34% between 1755 and 1800: forty years later it had risen by another 53%. Land that had usually been able to support the population now had to feed many more. Traces of desperate efforts to bring more land into cultivation during this period are still visible today. High above the village of Bracara, on the very edges of cliffs at Mallaigmor and in many other places the people laboured to create feannagan or lazybeds where they could produce enough potatoes to feed the population.

The croft at Culnamuc was abandoned between 1891 and 1901, but traces of its buildings still survive. Lines in the bracken show where ground was cultivated and earthen walls or "dykes" built to protect crops from livestock.